As general contractors, we take over the execution of complete projects – the conception and economic analyses as well as the establishment of necessary facilities and supplier management. We develop economical algae production facilities that are conceived for individual needs, such as use in developing and emerging countries.

Customer Project in China
Phytolutions and OceanLab of Jacobs University installed the first 1.000 square meter outdoor microalgae plant in Weihai, CHINA. The production plant developed by Phytolutions will produce Omega 3 fatty acids, pigments and proteins. The plant went operational on November 20th 2013. After a successful training and implementation, it is planned to modify this new technology for offshore-microalgae production. Micro- and macro algae can serve as important source of proteins and fatty acids for China, which has limited space for conventional farming on land.

Customer Project in Germany
Phytolutions installed a 200 square meter outdoor microalgae plant at a sewage plant in central Germany. This algae plant will be used to reduce phosphate from wastewater while the biomass will be converted into bioplastics and fuels. 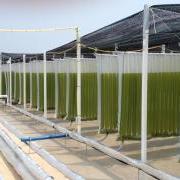